Arabic Calligraphy tools are considered one of the simplest tools compared to other art tools, 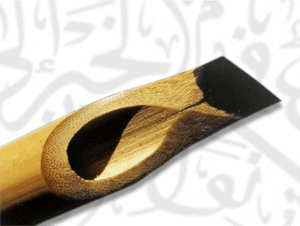 such as graphic arts, and other fine arts.The main tools that a calligrapher will need to create a calligraphy masterpiece are a reed pen, ink and paper in addition to their skill in mastering the art of Arabic calligraphy.

But that does not mean that Arabic calligrapher does not need more than that, and also does not also mean that any type of ink, or paper or even any type of reed would be sufficient for the exercise of technical innovation. In the fact there are different kinds of reeds ranging in quality between rigidity and flexibility. The same applies to the inks, they are not all suitable for the use by any Arabic calligrapher, not to mention the paper type, and its degree of refinement and softness to the touch. All of those factors has a clear impact on the level of technical performance of the calligrapher in his written calligraphy or painting.  For all of the above mentioned reasons, it is important to have some helping tools that lies its’ importance in the degree of improvement on the Arabic calligraphy tools such as the knife, Almikt (Horn Makta), and Alliqh (Inkwell and Likka)

Our Arabic Calligraphy tools : pens, inks, papers and other supplies are all imported from the Middle east where Islamic calligraphy originated.

You can buy Arabic calligraphy tools by click on the below button.