There are a variety of calligraphy tools that you can use. 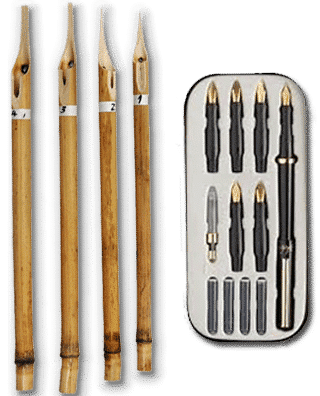 Calligraphy sets, felt tip pens, markers, fountain pens, and calligraphy dip pens which come normally with a flat tip. This will not work very well with Arabic calligraphy. The tip will be prepared by sharpening it and cutting it at an oblique angle of about 35-40 degrees. You can use any kinds of tools to be able to do those shapes to make sure that the pen can work well for Arabic calligraphy purposes.

A reed pen, or “Qalam” in Arabic, is the traditional tool used for writing calligraphy. Arabic calligraphers prefer the reed pen over traditional one because its natural materials flexibility that allows for a better range of motion while writing. Reeds naturally grow in swamp areas and shallow waters. As soon as the reed is harvested, it is seasoned for four years by burying it in horse manure, chosen because it maintains a steady temperature. During this procedures the reed hardens and darkens and become perfect source for a reed pen.

After that the reed is cut in a way that its size and angle the tip are appropriate for the right type of script that you want to use it for. The tip is carved with a penknife, and trimmed at certain angle on a “Makta,” “a small cutting board made especially for this use”. The pen is then slit down the middle, which will make it able to hold about one letter’s worth of ink. The reed pen can be substituted with: