How Many Styles Does Arabic Calligraphy Has? 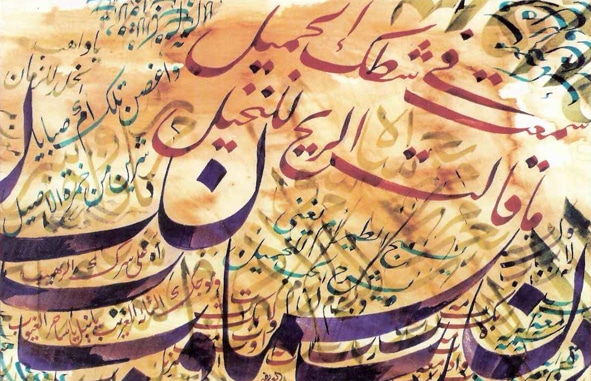 One of the oldest Arabic scripts that has been developed within the third or fourth century A.D. Its name refers to one of the Iraq’s cities, it is called Kufa , and it’s troublesome to use for writing long texts, however it’s still utilized in titles and architecture these days.

Its name refers to the size of the pen used for writing this type of Arabic script. Unlike the Kufi, this script is readable and you can use it to write either a title or paragraphs. Its glyphs are distinguished by their curves and harmony between each other, which make them appealing to be used by many modern designers in contemporary designs. It first appeared in the 10th century.

The word “Naskh” means “copy”. As you might guess from the name it is used for writing long texts, such as books, because it is readable and comfortable for the eyes, unlike the old Kufi. In the digital world it is preferred in printing due to the simple shapes of its glyphs.

Its name refers to the Arabic word “ruqa’a”, which means “piece of paper”, and it is used for writing small content, such as correspondence. It is still used nowadays both in handwriting and computer writing. The Ottoman developed it into a new script called Ijaza.

The name means “suspension”. You can easily find out the reason for the name when you look at the font and how the glyphs are connected and hung from each other. It was used for a number of purposes including writing letters, royal messages and literature.

As we have mentioned earlier in the history of Arabic calligraphy, this script is a combination of Naskh and Ta’liq that offers a more readable script compared to the Ta’liq version. This script was commonly used in Persia, India, and Pakistan. There is also another, derived version of this script known as Shikaste.

This script is one of the latest script developments that came into existence during the Ottoman period in the 16th century, and it is still commonly used in today’s designs and art because of its beautiful curves and shapes. Many designers are still using it to construct complex Arabic calligraphy forms.

This script has developed in North Africa and Spain and its name was inspired by the area “Maghrib”, which means west in Arabic, or west of the Middle East. This script is distinguished by its long letters and curves, and it is still used in some countries such as Morocco, Algeria, and Tunisia.

In addition to the Arabic scripts above, there are a number of other types, such as the Muhaqqaq, Ryhani, and Tawqi’.