Menu
Log in
Register
Install the app
You are using an out of date browser. It may not display this or other websites correctly.
You should upgrade or use an alternative browser.

This interesting coin is a rare example the Zangids Dynasty silver dirham coinage and of a beautiful early Thuluth calligraphy in Arabic.

It is thought to have been minted exclusively at Halab, commencing in AH 571 (1176 AD), but it has no mint location indicated. The Zangids coinage were known for their fine early Thuluth calligraphy, exquisitely engraved metalwork and very carefully struck dirhams from the finest silver. This medieval Zangids dirham coin was created by a true master Engraver and exemplifies early Thuluth Arabic script at its finest. Measuring only 17 mm in diameter, the most striking aspect of this coin’s Thuluth writing is the gem-like engraving, careful execution and amazing eye for precise calligraphic detail. 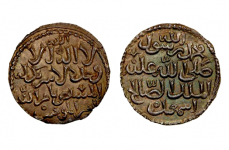 Thuluth script style is considered by many to be the most difficult and challenging of all Arabic scripts, under normal writing conditions. However, under the tiny micro-size conditions of die engraving metalwork, Thuluth calligraphy becomes even more challenging. Developed in the 9th century AD, Arabic Thuluth script and calligraphy is commonly known today as the “mother of scripts” and is considered the most difficult to perfect and the hardest Arabic script to learn. This well preserved dirham specimen depicts a distinctive early Thuluth style of cursive lettering, flowing line work that may often touch or interlace.

“No deity but Allah, alone (and) no partner for him. Al-Mustadhi, ruler by Allah, Commander of the faithful.”

Reverse side:​
Continuation of the Kalima and Salawat. Again, Allah named at the top followed by citing the name of King (local area ruler) al-Salih Isma'il al-Malik; all in five line of Thuluth calligraphy.

“Mohammad is the messenger of Allah. Allah prayed over him. The good King, al-Salih al-Malik Isma’il”

Dirham Calligraphy Script Notes:​
1. The obverse and reverse sides show Allah named at the top, but the second line in Kalima is read first.
2. The third line on the reverse is missing the standard Kalima finish “wa sallam” stating, "and greeted (him).”
3. The fifth line on the reverse is written without the vowel letter y after the glottal aleph in the name “Isma’l” thus his name reads as “Ism’l.”
4. As-Salih Ismaʿil al-Malik (1163–1181) was an emir of Damascus from 1163 through 1174 AD and emir of Aleppo from 1174 through 1184 AD. He was the son of Nur ad-Din Maḥmūd Zengī.

Lastly, one of the unusual stylistic features of the above Zangids dirham is the “fork-like” (Y shaped) ascenders that terminate nearly all of vertical line, rather than the usual “barbed” head ascenders. Given the size limitations of this coin’s diameter, the metalwork by the engraver/die-cutter very successfully managed to maintain smooth, free flowing letters only 3mm in height and 2mm in width. This master engraver/die-cutters success is a testament to his/her knowledge of Thuluth 1/3 proportions, 1/3 slope requirements and cursive interlacing, a likely result of the calligraphers pen shapes and sizes.

Staff member
Thanks for sharing your post, really it is a precious information about these coins during Abbasid era. Regarding the images of old Thuluth, follow these links